I’ve been asked if I could elaborate on the post about the “combine” attribute in <layer> and <merge> elements, particularly on how it can effect opacity and color.

This post will use screen shots from a Frogans site created for this purpose, which you can download in a ZIP archive here. To view the site, unzip the archive and place the “combiner” folder in the “test” folder of your Frogans Player for developers (alpha version).

The “combine” attribute determines the effect of a layer’s alpha channel (transparent parts) on the alpha channels of other layers.

The four possible values for the “combine” attribute are “add,” “clip,” “cutout” and “inter.”

Let’s take a closer look at each one:

When the value of your layer’s “combine” element is “add,” then that layer’s alpha channel has no effect on the transparencies of the layers below it. 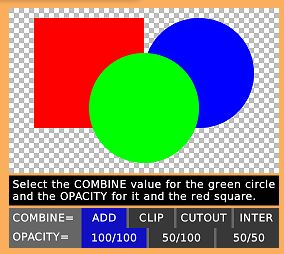 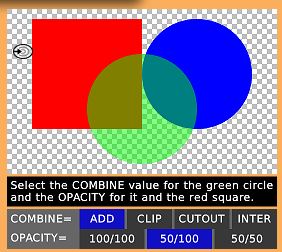 On the other hand, where both the green circle and the red square have 50% opacity, then where these two layers overlap, the color will be a blend of 50% of the green with 25% of the red.

When the “combine” value of a layer is “clip,” then that layer will inherit the alpha channels of the layers below it.

In the screenshot below, the green circle’s “combine” value is “clip.” Its own alpha channel, which gives it its circular shape, has also inherited the alpha channels of the two layers below it, such that, in the areas that are transparent for the other layers, this layer is also transparent. 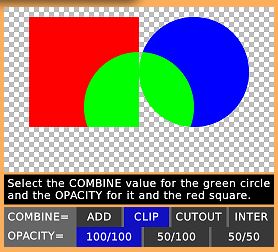 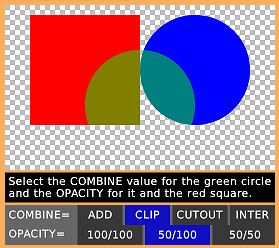 When the red square layer also has 50% opacity (or is 50% transparent), then the green circle will inherit that transparency in the area where it overlaps. the color will still be a 50%/50% blend of red and green, but with an overall opacity of 50%. Note that, because of the overall 50% opacity, the color will also blend with the colors of any graphics seen behind them. 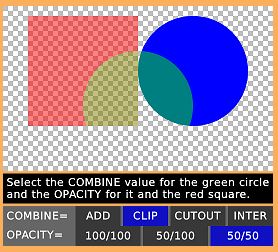 In the screenshot below, the green circle layer’s combine value is “cutout.” Because it is rendered invisible, it has no effect on the colors of the layers behind it. 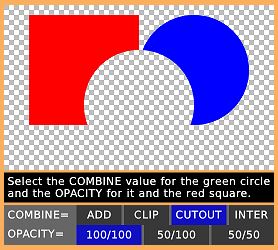 Where the green circle has 50% opacity, the layers behind will inherit that opacity. Their colors keep the same values, even though they are 50% transparent in these areas. Note that, because of their transparency, their colors will blend with the colors of any graphics seen behind them. 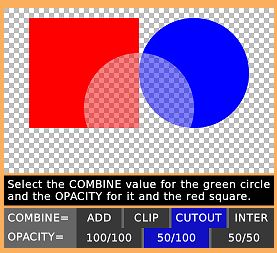 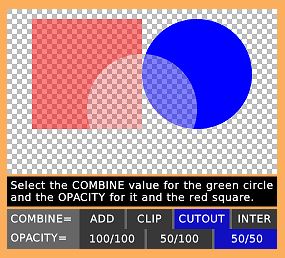 In the screenshot below, the green circle, having a “combine attribute of “inter,” is invisible, but its shape serves as a mask, displaying the red square and the blue circle only where they intersect with the green circle. 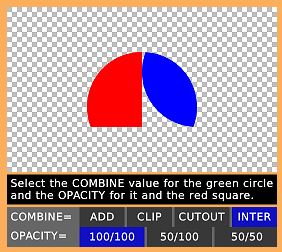 When the green circle layer in front has 50% opacity, the opacity of the layers behind are divided by 2 – or 50% each. Their colors are not otherwise be affected. 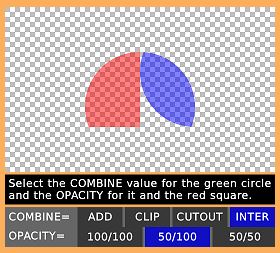 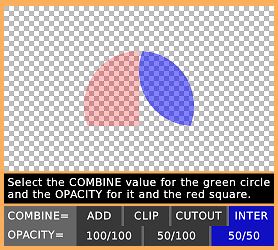 A note about how the slides are made

In the Frogans site used for the screenshot (downloadable here), <merge> elements are used instead of <layer> elements. By merging resources together this way, “combine” attribute values effect only the merge elements, which are then used to create a single layer.

If this had been done using <layer> elements, then the checkerboard pattern behind would also have be effected by the “combine” attribute value in the green circle layer.

Here’s some example code (from cutout_50_100.fsdl) showing how this part of the slide is made: