There are tools and tricks in FSDL for getting the most out of the fewest imported image files. In this post, we’re going to look at the “selection” and “bounds” attributes in the <resimage> element. Together, they allow you to create resources from different parts of a same image.

FSDL allows you to import image files to use in your Frogans slides. You can use them as backgrounds and button images. You can combine them in layers to make original compositions.

At the same time, you don’t want to over-use imported image files. For one thing, each new image file adds to the overall volume of data that is downloaded by each end user – and FSDL sets limits on this volume for each slide.

Additionally, for each individual image file imported, Frogans Player must make an HTTP request over the network. And each HTTP request takes a certain amount of time (depending on the quality of the network connection, among other things), during which the user has to wait.

Fortunately, you can import multiple graphics from a single image and then place the portions of image that you need for composing your slide, using the “selection” and “bounds” attributes in the <resimage> element .

Putting it to work

Let’s put this idea to work by taking a single image that already has elements that can be used for buttons, like Rembrant’s “The Syndics of the Clothmaker’s Guild’ (or “The Staalmeesters”). There are 6 people depicted in the painting. Each one of their faces can be used as a button (perhaps linking to slides containing their biographies, shoe sizes, etc.). 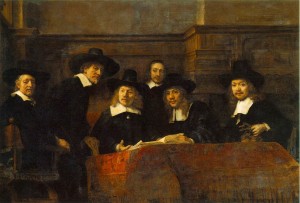 In an FSDL document we create a <file> element for locating the image file:

Let’s use this as a backgound image in front of which we’ll place our buttons. So, we’ll create a resource (note that the value “bkg_f” of “fileid,” above, is the same as that for “fileref,” below):

And then present this resource as a layer (note that the value “bkg_r” of “resid,” above, is the same as that for “resref,” below).

No that the file has been imported once, it (or parts of it) can be used over and over again without having to import it again.

Using the “selection” and “bounds” attributes

To create a button from the face of one the people in in the image, we’ll create a new resource from the same image, but in which the image is “cropped” around that face.

The first thing we need to do is determine the xy coordinates of the crop. This can be done by opening the image in Photoshop or GIMP, drawing a rectangle of the region to crop. 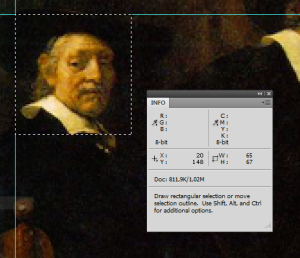 In the screenshot of the Photoshop info window, above, we see that the selection is 65 pixels wide and 67 pixels tall. So, that’s going to be the size of our new cropped image resource.

20 x 148 in the screenshot, above, indicate the position of the mouse in the upper left-hand corner of the selection. We’ll need these coordinates for cropping the image in the right place.

Now, let’s put these numbers to use in a new image resource:

Note that “fileref” is still “bkg_f,” just like when we created the background image.

Now, if we create a layer, placing this new resource at the 20,148 xy coordinates, it will be perfectly aligned with the image below, so you won’t see that it is there.

Create a “relief” to show the button

To make it pop out from the background, we’ll add a special effect: “relief.” It’s kind of an inner shadow. First we define a subtle effect in a <setrelief> element

Then, we insert “reliefref=’frame_rel'” into the <layer> element:

…and we can see our new button image in all of its glory:

This layer can now be put into a button (see Button Basics for the how-to).

Here’s the contents of the button element where the rollover image (“visible=’focus'”) uses a “shadow” instead of a “relief” to make the rollover really pop out:

Here’s a screenshot with buttons made for all of the heads in the picture using this technique. The first button shows the rollover, where you can see the effect of replacing a subtle “relief” with a stronger “shadow.” 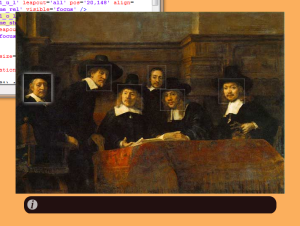 Using similar techniques, you can put all kinds of different button images in one imported file and place them as you like.

Click here for an archive of this slide. To view it in the Frogans Player for Developers alpha, place the unzipped folder “extract” in the “test” folder in folder containing Frogans Player. Then open a Frogans site using the address “test*extract”.