A button is created in FSDL by placing two or more layers as children of a <button>, for example:

Its very important for each button have two visibly distinct states. For one thing, on desktop computers, the mouse does not change appearance when it passes over a button. Moreover, on touchscreen devices, which traditionally don’t support rollovers, Frogans Player will use an altogether different method for selecting buttons. This method uses a kind of virtual trackpad adjacent to the slide. In both cases, a rollover effect is the only way for a user to know if where and when to click on a button.

[Check out this video showing a demo of how Frogans Player works on desktop and touchscreen devices. You can see how the “pad” works around the 20 minute mark.]

Let’s start off by importing an image that can serve for both states of the button. We can use effects in FSDL to make each state visually distinctive. Here’s an image file (“button_a.png”) that should do the trick:

We’re going to create a button that goes to another slide in the same Frogans site. So we need to also create a reference to the FSDL file that the button is going to navigate to:

[Alternatively, you can have the button reload the same slide by referring to its FSDL file. At any rate, a button has to go somewhere or else Frogans Player will give you a parsing error.]

Now, you can present the button on the slide with this code:

The button, in its unfocused state, should look like this on your slide: 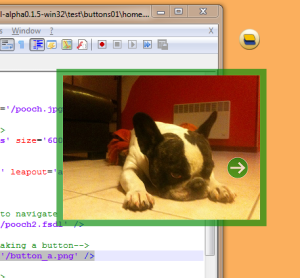 Notice that the two layers in the <button> refer back to the same resource. The difference between the two <layer> elements is in the placement (the “pos” attribute) and the opacity. By making the first, unfocused layer only 65% opaque, and by placing the second, rollover layer at bit to the right, we have enough of a visual difference to catch the user’s eye and to make it obvious that this is a button.

Click here for an archive of this and a second slide. Together, they make a real Frogans site.

Click here for a version of the same site that uses some more advanced features for making the “vignette” presentation more entertaining. I’ll get to the techniques behind that in another post.